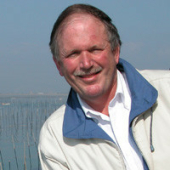 He received the 1992 Marinalg Award for his work in East Africa. He is an award-winning author who is extensively published.  He is credited for developing the global and North American regenerative seaweed aquaculture industries including Integrated Multi-Trophic Aquaculture & nutrient bioextraction. He has been a national lecturer, secretary, a member of the Phycological of America’s Executive Committee and President (2001). In 2019 he received the Phycological Society of America’s Award of Excellence for his sustained scholarly contributions in, and impact, on the field of phycology over his career. He is also a visiting scientist at The Woods Hole Oceanographic Institution.

The University of Connecticut is one of the top public universities in the United States.

Global seaweed aquaculture production is approximately 30 million metric tons with an annual value of > $13.7 billion in 2020. In the past four hundred years, seaweeds have been very important part of Asian cuisine more so than in western cultures. Global seaweed aquaculture production occupies approximately 25% of total world marine aquaculture production by weight, with upwards of 97% being produced in Asia. Seaweed aquaculture production is dominated (> 81% of total production) by several species: the brown kelp, Saccharina japonica and Undaria pinnatifida; and the red seaweeds including Neopyropia/Pyropia/Porphyra spp. (‘nori’ in Japanese and ‘gim’ in Korean), Kappaphycus alvarezii and Eucheuma striatum (carrageenophytes) and Gracilaria/Gracilariopsis spp. (agarophytes). Currently, more than 1,000 tons of seaweed have been cultivated in the USA. Although seaweed aquaculture is a relatively new industry in the USA, the demand by US markets is expected to increase rapidly due to growing consumer demand for new protein sources, healthy food supplements, food industry’s interest in sustainable textural additives and food security. The increasing demand for safe, healthy, and minimally processed foods is creating an opportunity for seaweed products as functional foods, nutraceuticals, and alternative medicinal products in the US and global marketplace. As part of ARPA-E's (DOE) MARINER program, projects are in process for selective breeding and the development of scalable seaweed farms in temperate and tropical waters. There are now unique opportunities for US seaweed farmers, both for land-based and open water farms, to work with phycologists, ocean engineers, plant geneticists and others to develop and apply advanced breeding technologies that will increase growth and productivity of these farming systems.